Hi, friends. Welcome to the weekend. Hungry for some brunch?

Non-crying section, please? Every traveler has their pet peeves, but crying babies make the list for almost every plane passenger. Now Japan Airlines has revealed a new tool that lets you dodge infants when you book your seat.”Passengers traveling with children between 8 days and 2 years old who select their seats on the JAL website will have a child icon displayed on their seats on the seat selection screen,” reads the airline’s website.

Well, that’s good, I suppsose. I recall once being on a long flight once next to two screaming, almost demonic children. The flight attendant refused to move me on the ridiculous grounds that I was their father.

Excessive exercise can tire out your brain to the point that you have trouble making decisions, a new study claims. Athletes who exerted themselves to the point of exhaustion showed reduced activity in an area of the brain important for making decisions. And they appeared more impulsive in tests that evaluated financial decision-making, going for immediate rewards instead of larger ones that would take more time to achieve, the researchers found. They are also more likely to cheat on their diet. So too much exercise leads to bad decisions? Man, I must be Solomon then.

The Titanic sails again. Well, at least an exact replica of it, set to launch in 2022.

Clive Palmer, chairman of Blue Star Line wrote in a statement: “The ship will follow the original journey…” Um, Clive….yeah, you might want to think through your wording on this

This may not be the time to mention that last week a giant iceberg, “larger than Los Angeles” broke off from Antarctica.

Rusty Yusonoff has a cool last name and an even cooler hobby. He pokes fun at modern culture by morphing the famous human evolution silhouette. Here are some of the better ones (the rest are here). More than 26,000 students in public and private schools and preschool programs in New York State had religious exemptions from required vaccines during the 2017–18 school year.

To lower the number of children susceptible to measles and other vaccine-preventable diseases, New York State lawmakers voted in June to end religious exemptions from immunizations required for school children.

I’m all for vacinations, but is this a good thing or government overreach?

Speaking of government overreach…Did you forget to walk your dog today? Do you live in Australia? If you answered the first question ‘yes’ you had better answer the second question ‘no’. A new law in Australia will fine owners who do not take their dogs for a walk every day. More specifically, you have two hours after you get home to walk Fido, or face a $4,000 fine!  The penalty would not apply if a dog was kept in a backyard, where it could exercise, or if it had to be confined indoors for its welfare. I love dogs, but as a libertarian this really yanks my chain. Unenforceable laws degrade society, and enforcing this one would require Orwellian surveillance by the state.

An emergency room in Poland designed a new logo:

Yeah, that’s bad. Thankfully someone with photoshop “fixed” it:

Josh Gardner was just happily driving down the highway in South Carolina when this happened:

Yes, a flying turtle sailed into his windshield. It happened after another vehicle sent it into the air. “I still don’t understand how it happened”. said Gardner. I think I know:

So, last week was Banned Books Week, a hilariously ill-named promotion of the American Library. James Heaney is having none of it:

During this seven-day festival of self-righteousness, librarians across the country posture as opponents of censorship.

In reality, of course, they’re not fighting censorship at all.  They can’t, because censorship doesn’t exist in this country.  Any book can be published, any book can be sold.  There are no “banned books.”  The ALA is actually fighting parents, many of whom have the temerity to request changes to their school curricula or even, in the worst cases, ask their communities to make it slightly more difficult for children to access certain books that, in the parents’ opinion, could cause harm to those children.  Access will not be denied, of course: again, censorship, the actual suppression of speech such that it cannot be heard, does not exist* in this country, and has been repeatedly ruled unconstitutional in a variety of contexts.

“Libraries Against Parenting”, however, lacks the same popular appeal as “Banned Books Week”, so America’s librarians construct an elaborate fantasy in which any attempt whatsoever to require or merely encourage a library to act in loco parentis (like any other responsible adult member of the community) is, through some arcane ritual of linguistic alchemy, a form of “censorship.”

Have you ever noticed that the Washington Monument looks ABSOLUTELY NOTHING LIKE George Washington? This really bugs me.

A Florida woman spotted something odd in the neighborhood pond. An alligator? Well, yes, but those are more common than dogs in Florida.  This was an alligator with a knife sticking out of its head: No one knows how he got it (my guess involves beer and rednecks) but its rumored whoever is able to pull it out becomes king of Florida.

Ever seen a sunset and a solar eclipse at the same time? Well, you have now:

It’s not enough, Nicole Brewer argues at American Theatre, for directors to produced diverse works with a diverse slate of actors, they should focus exclusively on “anti-racist ideas” and “values”: “You’re not practicing ART [anti-racist theatre] properly unless change is felt, and you experience an intuitive understanding that the plurality of your humanity is welcome.” Hmmm…I’m not quite sure what the plural of my humanity is. Is this a crack about my weight? But in any case, art with an agenda is almost always bad art.

Have you ever written a thesis or dissertation? What was it about? I’m really interested. I wrote an M.A. thesis on the relationship between God and Time. I wish I would have seen the following list of phrases and their definitions before I wrote it:

“IT HAS LONG BEEN KNOWN”…
I didn’t look up the original reference.

“A DEFINITE TREND IS EVIDENT”…
These data are practically meaningless.

“WHILE IT HAS NOT BEEN POSSIBLE TO PROVIDE DEFINITE ANSWERS TO THE QUESTIONS”…
An unsuccessful experiment, but I still hope to get it published.

“THREE OF THE SAMPLES WERE CHOSEN FOR DETAILED STUDY”…
The other results didn’t make any sense.

“TYPICAL RESULTS ARE SHOWN”…
This is the prettiest graph.

“IN MY EXPERIENCE”…
Once

“IN CASE AFTER CASE”…
Twice

“IN A SERIES OF CASES”…
Thrice

“IT IS BELIEVED THAT”…
I think.

“IT IS GENERALLY BELIEVED THAT”…
A couple of others think so, too.

“CORRECT WITHIN AN ORDER OF MAGNITUDE”…
Wrong.

“ACCORDING TO STATISTICAL ANALYSIS”…
Rumor has it.

“A STATISTICALLY-ORIENTED PROJECTION OF THE SIGNIFICANCE OF THESE FINDINGS”…
A wild guess.

“A CAREFUL ANALYSIS OF OBTAINABLE DATA”…
Three pages of notes were obliterated when I knocked over a glass of soda.

“IT IS CLEAR THAT MUCH ADDITIONAL WORK WILL BE REQUIRED BEFORE A COMPLETE UNDERSTANDING OF THIS PHENOMENON OCCURS”…
I don’t understand it.

“AFTER ADDITIONAL STUDY BY MY COLLEAGUES”…
They don’t understand it either.

“THANKS ARE DUE TO JOE BLOTZ FOR ASSISTANCE WITH THE EXPERIMENT AND TO CINDY ADAMS FOR VALUABLE DISCUSSIONS”…
Mr. Blotz did the work and Ms. Adams explained to me what it meant.

“A HIGHLY SIGNIFICANT AREA FOR EXPLORATORY STUDY”…
A totally useless topic selected by my committee.

“IT IS HOPED THAT THIS STUDY WILL STIMULATE FURTHER INVESTIGATION IN THIS FIELD”…
I quit.

Biologos had a fascinating discussion with  Aaron Niequist, who previously led worship at Mars Hill Bible Church in Grand Rapids and at Willow Creek Community Church.

“And so what I do is get up on a big stage with lights pointed at me and my face on a jumbotron and me holding the microphone. In that context, I’m saying ‘hey, don’t focus on me, me, me.’ It’s a very conflicting thing.”

In his years leading worship at Willow Creek,  he felt like he had to “work against what the room was declaring really loudly — which is ‘focus on those people up on the stage in the lights.’”

Niequist hit a rocky point and had what he called “a real faith crisis” after college when he was around 22. The problem was, he was a professional worship leader at that point. “How do you lead these songs, how do you say ‘let’s worship this God that I don’t even know if I believe anymore,’” he remembered feeling.

What helped him through this? Supportive friends and family, one of whom recommended Dallas Willard’s book, The Divine Conspiracy.

“I was like ‘wait, if this is the story — it’s not just you’re a sinner, say a prayer so you can go to Heaven someday but if it’s you get to join what God is doing to redeem and restore all things, I get to? You get to? We get to? I’m in. Let’s do this.’ That was as much a conversion moment as I’ve ever had in my life and it was about the Kingdom.”

Niequist’s perspective on everything changed and so did his goals. “It … reoriented the goal from getting people saved to getting us all into discipleship and Christ-likeness, transformation,” he said. Up until then, the only tools in his toolbox as a worship leader were “four pop songs and a hymn.”

He goes on to discover something called liturgy. You can hear about it here.

And now for a random reminder that, yes, we live in a time of political division, climate change, income inequality and various other maladies. But it could be worse:

This is interesting. How to visualize the speed of light? Here’s how:

A climate activist group called Extinction Rebellion somehow got a hold of a fire truck, filled it with 400 gallons of fake blood, and aimed it at the U.K. Treasury Building. What could go wrong? 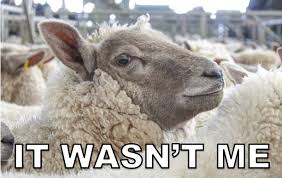 Well, that’s it for this week, friends. Have a great weekend!