Hello, friends, and welcome to the weekend. Ready for brunch?

It’s November 2019 and Los Angeles is in a state of urban decay. The population has exploded to 106 million people, and humans face a new threat from manufactured biological robots gone rogue…

Back in 1982, this is how Blade Runner director Ridley Scott imagined the world would be. Here’s the trailer. It’s interesting to see how they imagined society would be.

Speaking of robots, what if they all had your face? Or, to put it another way, is your face worth $129,000? A company will pay you that for using it for their robots:

The company is searching for a ‘kind and friendly’ face to be the literal face of the robot once it goes into production. This will entail the selected person’s face being reproduced on potentially thousands of versions of the robots worldwide.

Obviously, this is not our usual remit of request, which is why we’re making this public appeal to try and find the right person. The designer knows that this is a big deal, and has agreed a fee of £100,000 to license the rights to the right face.

We know that this is an extremely unique request, and signing over the licenses to your face is potentially an extremely big decision. However, if you think this could be one for you please make a submission below:

Please send an e-mail with your photo to faces@geomiq.com

To be honest, I don’t even want my face; not sure why this company would. But it would have a nice perk: when the robots take over you can pretend you’re one of them and survive.

Married priests? Maybe soon, at least in the Amazon. Roman Catholic bishops gathered at the Vatican on Saturday proposed allowing married deacons from a region of the Amazon to become ordained priests in order to help address a clergy shortage in the region. Pope Francis still needs to affirm the proposal, but if approved, the change — though limited in scope — would represent a fundamental shift in what it has meant to be a Roman Catholic priest for nearly a millennium.

The text of the proposal does not make it immediately clear whether the change would apply only to married deacons who wish to join the priesthood, or if those who are already priests would be allowed to marry. The plan would only apply to the Amazon region.

Security cameras captured footage of a man robbing  Twin City Coin Laundry in Crystal City. Look carefully at the back of his shirt: 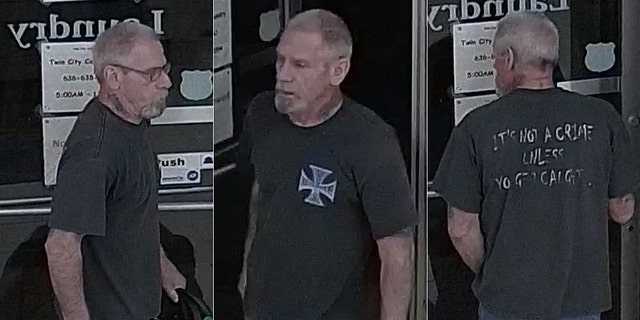 Sure worry works: 98% of the things I worry about don’t happen.

Pope Francis is hoping to give the Vatican Secret Archive an image makeover by changing the name of the ancient collection to something less mysterious. Francis declared that the collection, which dates back centuries and contains millions of documents, will from now on be known as the “Vatican Apostolic Archive.” Of course, scholars have long had access to the Secret Archives for pontificates up to 1939. That was the beginning of Pius XII’s rule began. Pius XII’s pontificate ended in 1958, and according to tradition, the archives concerning his papacy would not be open until 70 years after that date, or 2028. However, earlier this year, Francis announced that the Pius XII portion of the archives would be opened eight years early, in March 2020, amid pressure from scholars who want access while some Holocaust survivors are still alive.

“The church is not afraid of history,” Francis declared.

Francis did say, however, that the tunnel connecting the Vatican to Area 51 would remain off limits.

Police are searching for a man who walked into a bank in Nebraska this week and tried to open a checking account with a fake $1 million bill. Staff at the Pinnacle Bank branch in Lincoln reported the Monday morning incident to police. Bank employees say the man was adamant that the bill was real despite tellers’ attempts to convince him otherwise.

The costs of a desynchronized workweek: “Whereas we once shared the same temporal rhythms—five days on, two days off, federal holidays, thank-God-it’s-Fridays—our weeks are now shaped by the unpredictable dictates of our employers. Nearly a fifth of Americans hold jobs with nonstandard or variable hours. They may work seasonally, on rotating shifts, or in the gig economy driving for Uber or delivering for Postmates. Meanwhile, more people on the upper end of the pay scale are working long hours. Combine the people who have unpredictable workweeks with those who have prolonged ones, and you get a good third of the American labor force. The personalization of time may seem like a petty concern, and indeed some people consider it liberating to set their own hours or spend their ‘free’ time reaching for the brass ring. But the consequences could be debilitating for the U.S. in the same way they once were for the U.S.S.R. A calendar is more than the organization of days and months. It’s the blueprint for a shared life.”

Abu Bakr al-Baghadi was a hirsute terrorist, murderer, and rapist. He also founded ISIS. So it was a little surprising the way the Washington Post initially reported his death: 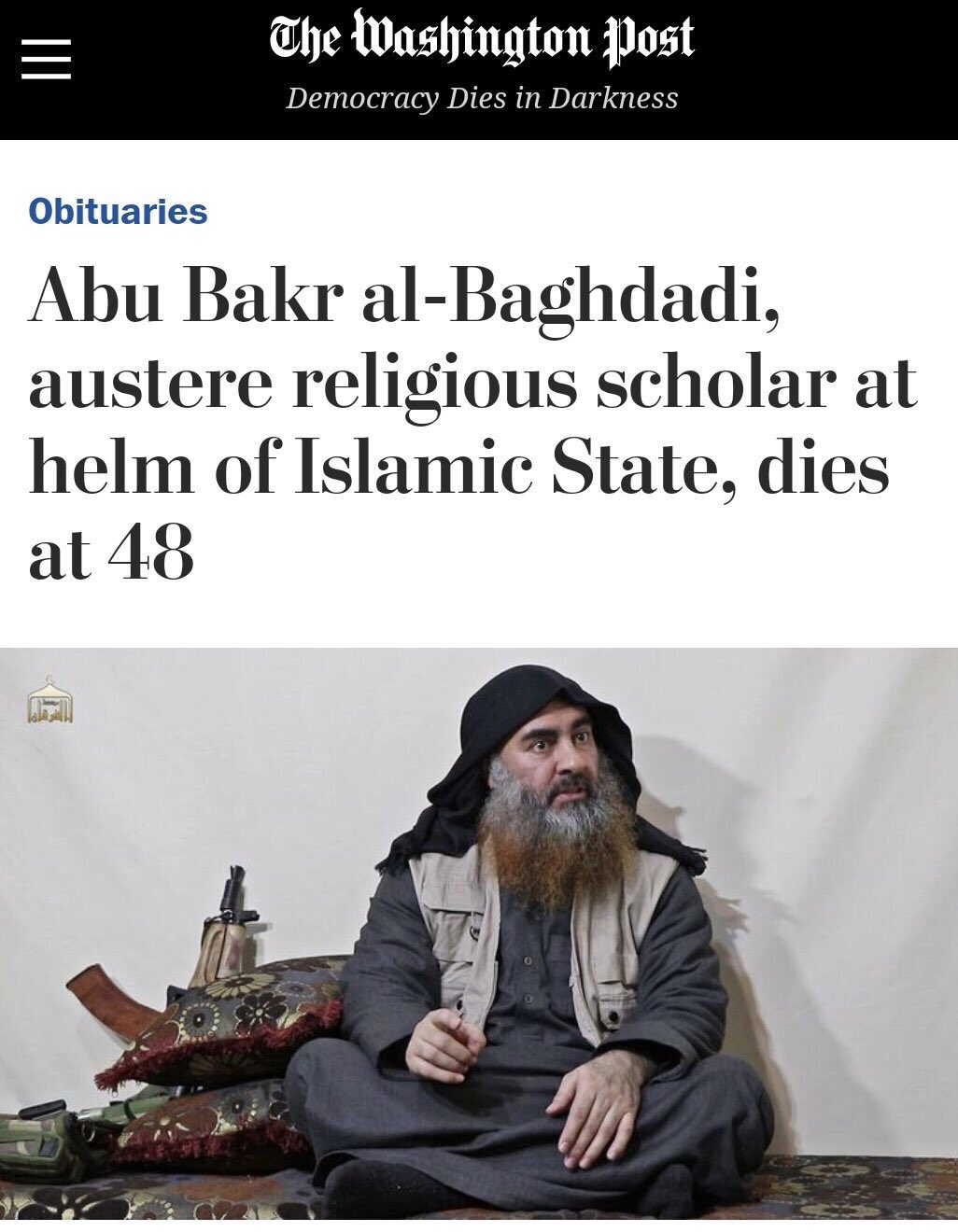 To be fair, WaPo soon corrected this. But not before the internet got ahold of a new meme: WaPo death notices: 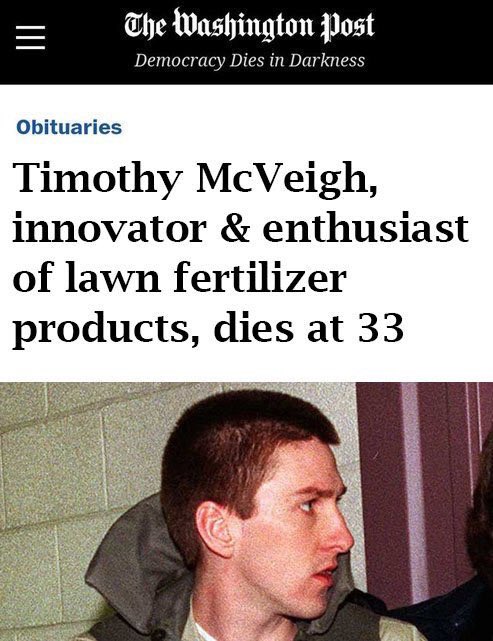 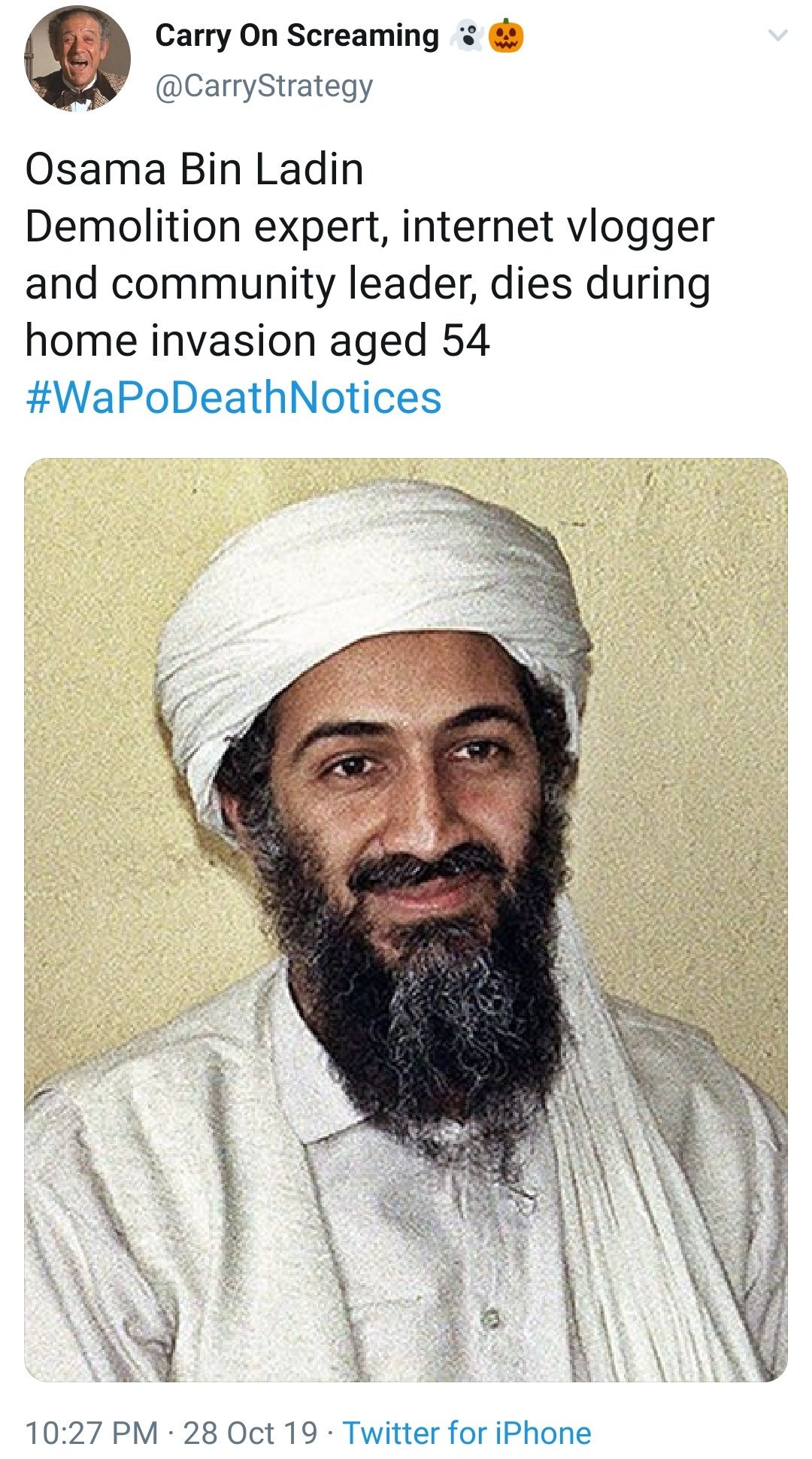 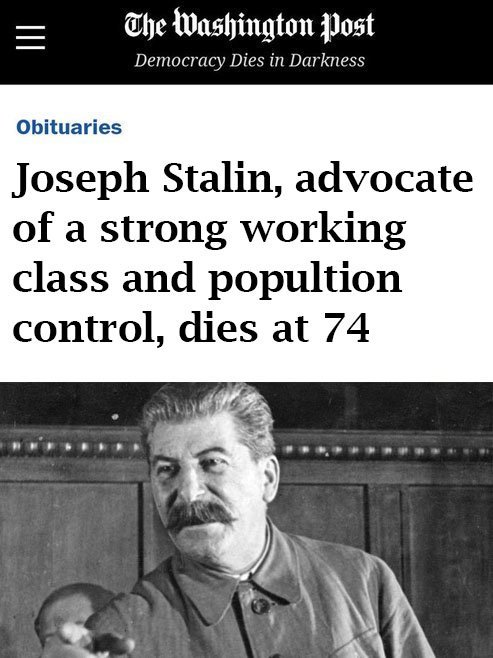 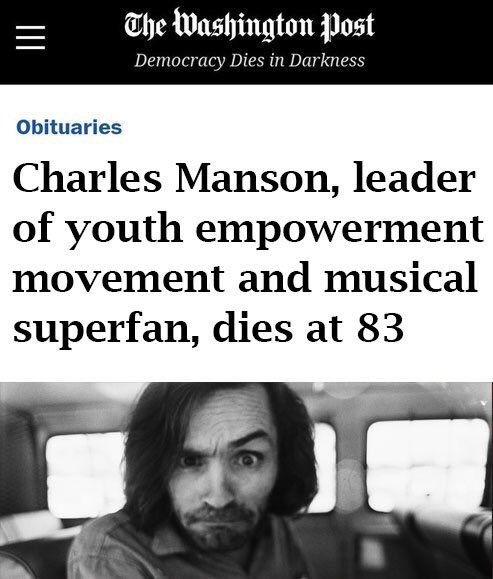 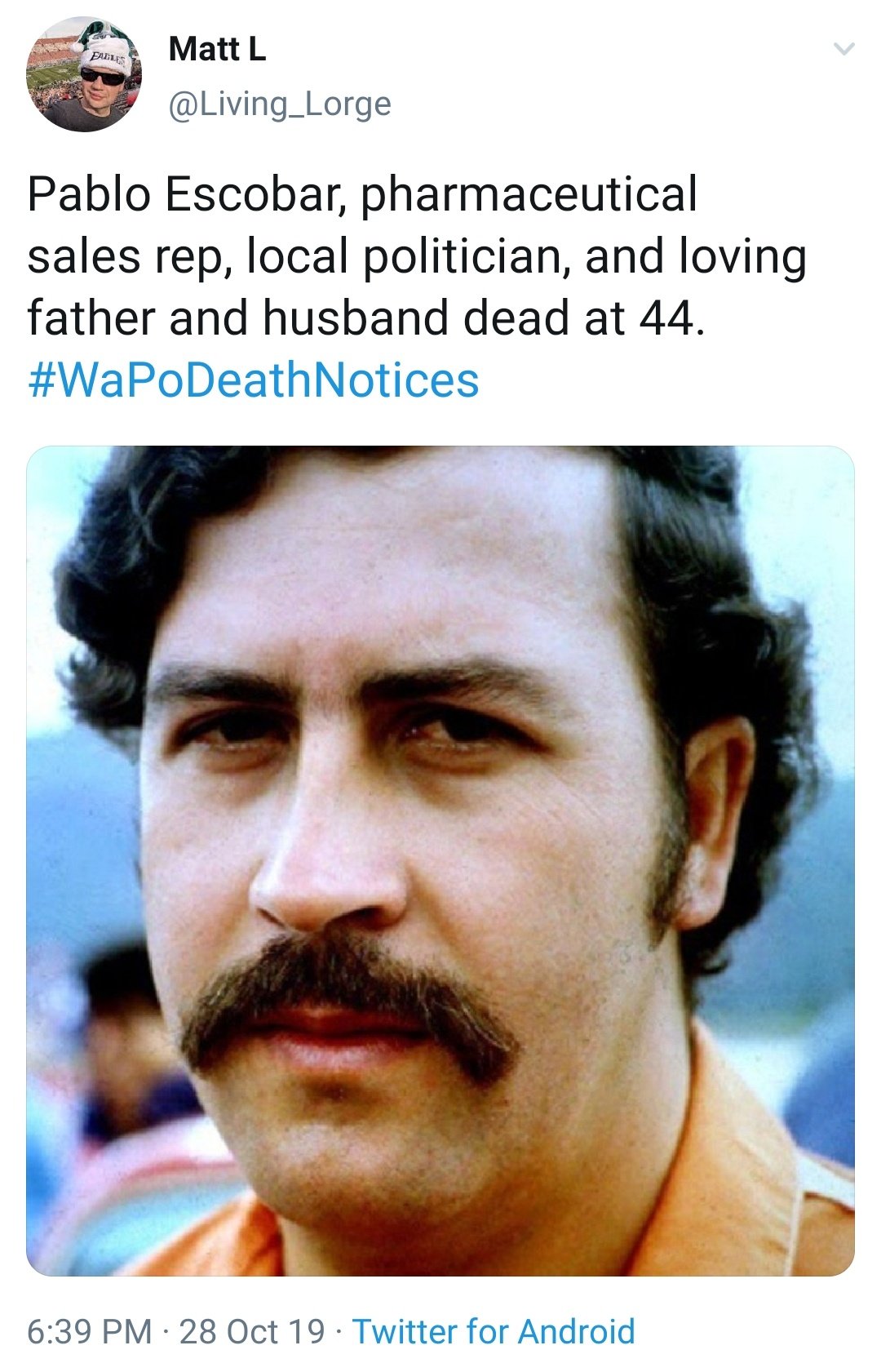 Here are some others, sans pictures

Okay, there are hundreds of these. Just click #WaPoDeathNotices if you want more. Feel free to share of few of your own (no fair swiping them off twitter) in the comments.

If you die in the same hospital you were born in, your average velocity is zero.

The following video is fake. I am posting it for a couple reasons. First, it is funny (at least if you watch the whole thing). Secondly it shows how good fake videos can be now, even ones made by people you’ve never heard of. A LOT of people this week took this as legit. Fake news has a very bright future.

Arthur Krystal surveys a handful of books on aging. They are mostly “chatty accounts meant to reassure us that getting old just means that we have to work harder at staying young.” Is that true?

“These authors aren’t blind to the perils of aging; they just prefer to see the upside. All maintain that seniors are more comfortable in their own skins, experiencing, Applewhite says, ‘less social anxiety, and fewer social phobias.’ There’s some evidence for this. The connection between happiness and aging—following the success of books like Jonathan Rauch’s The Happiness Curve: Why Life Gets Better After 50 and John Leland’s Happiness Is a Choice You Make: Lessons from a Year Among the Oldest Old, both published last year—has very nearly come to be accepted as fact. According to a 2011 Gallup survey, happiness follows the U-shaped curve first proposed in a 2008 study by the economists David Blanchflower and Andrew Oswald. They found that people’s sense of well-being was highest in childhood and old age, with a perceptible dip around midlife.

“Lately, however, the curve has invited skepticism. Apparently, its trajectory holds true mainly in countries where the median wage is high and people tend to live longer or, alternatively, where the poor feel resentment more keenly during middle age and don’t mind saying so. But there may be a simpler explanation: perhaps the people who participate in such surveys are those whose lives tend to follow the curve, while people who feel miserable at seventy or eighty, whose ennui is offset only by brooding over unrealized expectations, don’t even bother to open such questionnaires.”

What has been your experience regarding aging and happiness?

A Florida Democrat has put her face on condoms and revealed she plans to hand them out at a pride event in Orlando this weekend. State Rep. Anna Eskamani unveiled the design of her personalised prophylactics in a tweet Monday evening. 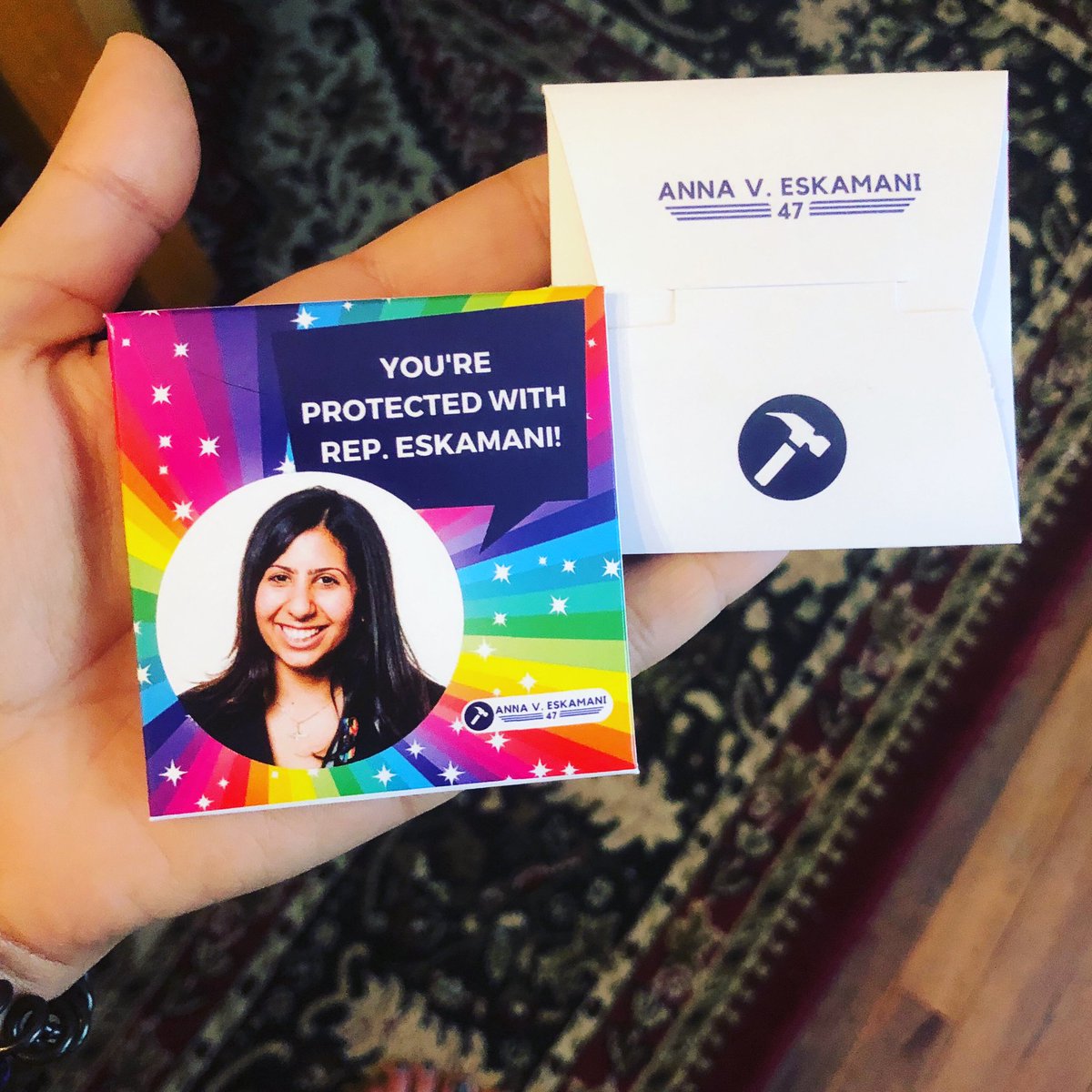 The former local Planned Parenthood director told Orlando Weekly that the custom condoms were not at all a juvenile attempt at publicity, but a “fun way to talk about courageous discussions” around sexuality and health.

Happens ALL THE TIME.

Wanna see a slow-mo of a water droplet hitting sand? Of course you do:

Can humans communicate brain-to-brain without language? A new study demonstrates we can, but boy is it inefficient:

“We present BrainNet which, to our knowledge, is the first multi-person non-invasive direct brain-to-brain interface for collaborative problem solving. The interface combines electroencephalography (EEG) to record brain signals and transcranial magnetic stimulation (TMS) to deliver information noninvasively to the brain. The interface allows three human subjects to collaborate and solve a task using direct brain-to-brain communication. Two of the three subjects are designated as “Senders” whose brain signals are decoded using real-time EEG data analysis. The decoding process extracts each Sender’s decision about whether to rotate a block in a Tetris-like game before it is dropped to fill a line. The Senders’ decisions are transmitted via the Internet to the brain of a third subject, the ‘Receiver,’ who cannot see the game screen. The Senders’ decisions are delivered to the Receiver’s brain via magnetic stimulation of the occipital cortex. The Receiver integrates the information received from the two Senders and uses an EEG interface to make a decision about either turning the block or keeping it in the same orientation. A second round of the game provides an additional chance for the Senders to evaluate the Receiver’s decision and send feedback to the Receiver’s brain, and for the Receiver to rectify a possible incorrect decision made in the first round. We evaluated the performance of BrainNet in terms of (1) Group-level performance during the game, (2) True/False positive rates of subjects’ decisions, and (3) Mutual information between subjects. Five groups, each with three human subjects, successfully used BrainNet to perform the collaborative task, with an average accuracy of 81.25%.”

Read more on the study here.

Mourners at a funeral in Germany got an involuntary high when they were accidentally served hash cake, police said Tuesday. The funeral party went to a restaurant after the burial in Wiethagen for coffee and cake, a German tradition. After eating the cake, 13 people reported experiencing nausea and dizziness and needed medical treatment. The Rostock police said the person in charge of the cakes asker her 18-year-old daughter to bake them. The mother mistakingly gave the wrong cake to the mourners. She instead took the hash cake, which was made for a separate occasion.

Well, that does it for this week. Don’t forget to add some WaPo death notices in the comments, and to send your mug to the robot face competition. Who knows, you could be the face of Skynet.