Today, of course, marks the terminus of voting for the U.S. 2020 electoral season. By this evening, some 140-150 million Americans will have voted; about 60 percent of eligible voters. Experts predict it will be a record.

That sounds like a win for democracy. And certainly it is better than when large groups of the population were prohibited or greatly discouraged from voting. In the United States today, any citizen over 18 who is not a felon can, with few exceptions, choose whom they want to represent them: from the local school board to the President of the world’s most powerful country.

And yet all is not well. And I am not primarily talking about the Electoral College, though that makes my vote for President considerable less weighty than if I lived in Pennsylvania or Florida. I’m thinking of other things.

Freedom House, the Washington-based bipartisan think tank, has, since 1973, it has published “Freedom in the World,” an annual country-by-country report that has been called the “Michelin Guide to democracy’s development.”

The latest edition recorded the fourteenth straight year of deteriorating freedom around the world; sixty-four countries have lost liberties in the past year, while only thirty-seven registered improvements.  Its assessment of the United States is also disturbing. In 2009, the U.S. had a score of ninety-four, out of a hundred, which ranked it near the top, just behind Germany, Switzerland, and Estonia. In the decade since, it has slipped eight points; it now ranks behind Greece, Slovakia, and Mauritius.

Looking at the United States, Freedom House analysts note the types of trends that they more customarily assign to fragile corners of the globe: “pressure on electoral integrity, judicial independence, and safeguards against corruption. Fierce rhetorical attacks on the press, the rule of law, and other pillars of democracy coming from American leaders, including the president himself.”

It is, of course, tempting to lay all this at the feet of Trump. But this trend is worldwide. And, interestingly, some scholars and advocates tend to identify a point of origin well before the election of 2016. According to Protect Democracy, a legal-watchdog group dedicated to combatting the rise of authoritarianism in America, “the growth and spread of democracies that defined the 20th Century peaked in the early days of the 21st; since 2005, the state of democracies around the world has receded.”

A picture is worth a thousand words: 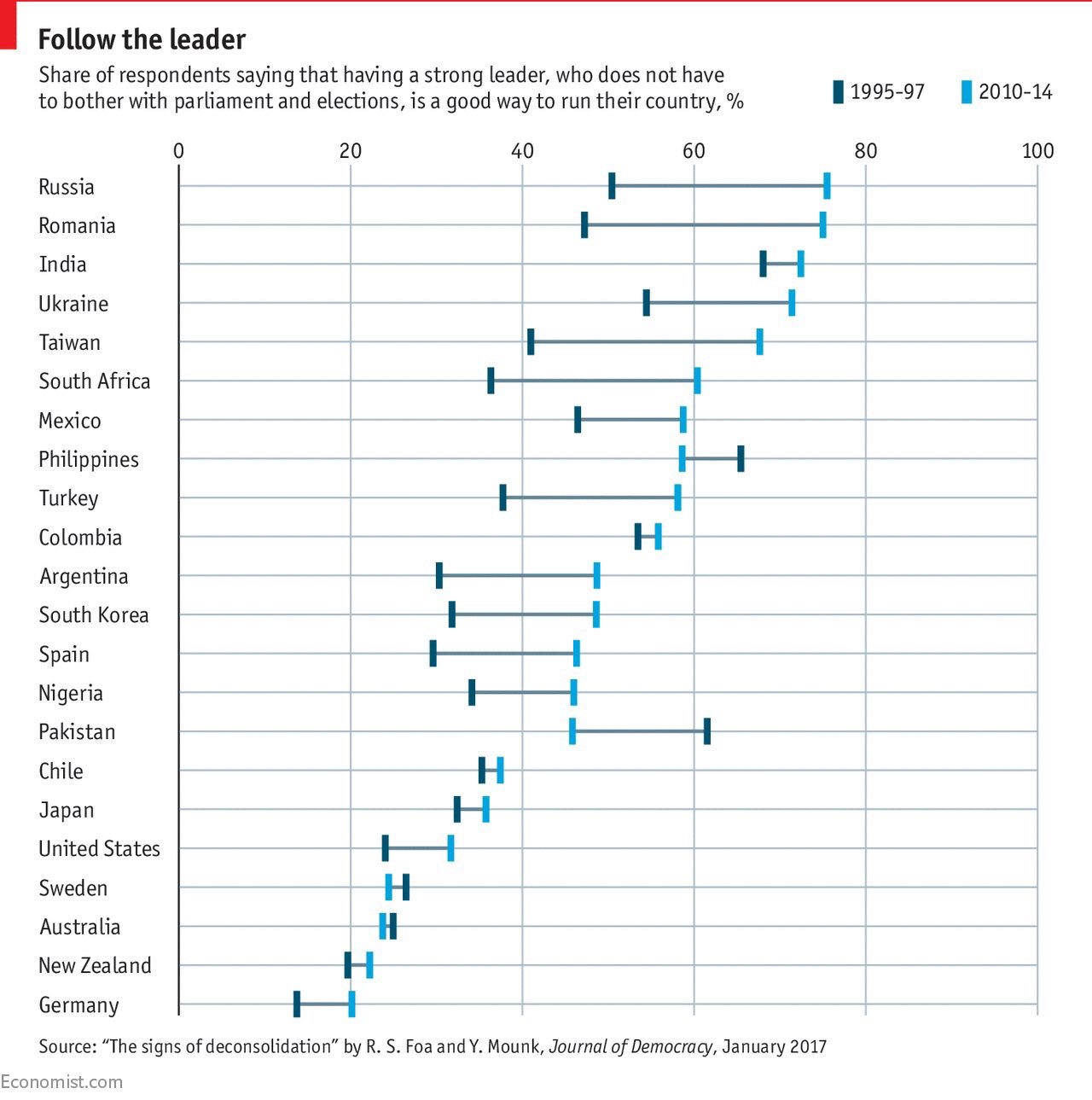 What’s going on? Well, for the U.S. at least the reality is that the votes of the average citizen do not shape actual public policy, as we can see from this analysis, from The Atlantic:

Across a range of issues, public policy does not reflect the preferences of the majority of Americans. If it did, the country would look radically different: Marijuana would be legal and campaign contributions more tightly regulated; paid parental leave would be the law of the land and public colleges free; the minimum wage would be higher and gun control much stricter; abortions would be more accessible in the early stages of pregnancy and illegal in the third trimester.

The subversion of the people’s preferences in our supposedly democratic system was explored in a 2014 study by the political scientists Martin Gilens of Princeton and Benjamin I. Page of Northwestern. Four broad theories have long sought to answer a fundamental question about our government: Who rules? One theory, the one we teach our children in civics classes, holds that the views of average people are decisive. Another theory suggests that mass-based interest groups such as the AARP have the power. A third theory predicts that business groups such as the Independent Insurance Agents and Brokers of America and the National Beer Wholesalers Association carry the day. A fourth theory holds that policy reflects the views of the economic elite.

Gilens and Page tested those theories by tracking how well the preferences of various groups predicted the way that Congress and the executive branch would act on 1,779 policy issues over a span of two decades. The results were shocking. Economic elites and narrow interest groups were very influential: They succeeded in getting their favored policies adopted about half of the time, and in stopping legislation to which they were opposed nearly all of the time. Mass-based interest groups, meanwhile, had little effect on public policy. As for the views of ordinary citizens, they had virtually no independent effect at all. “When the preferences of economic elites and the stands of organized interest groups are controlled for, the preferences of the average American appear to have only a minuscule, near-zero, statistically non-significant impact upon public policy,” Gilens and Page wrote.

That is sobering. And the authors did get a lot of pushback on this study. But their point, that the vote of the average American has a minuscule effect on public policy, needs to be added to other factors that affect the way democracy works in western countries.:

We are tempted to look at Donald Trump as a unique threat to democracy in the United States. Of course, many of the things he says and does (like refusing to agree before the election to a peaceful transition of power) do threaten democracy.

But Trump is more the result than the cause of Democracy’s backsliding.

And unless we get that, we are just setting ourselves up for another so-called strong man, who might actually be effectual and strategic.

Donald Trump won the presidency for many reasons, not just one.  But a deep feeling of powerlessness and voicelessness among voters was especially important.  Those who voted for Trump in the Republican primaries, more than those who supported his competition, said that they “don’t have any say about what the government does,” that “public officials don’t care much what people like me think,” and that “most politicians care only about the interests of the rich and powerful.”

In other words, the emotion Trump tapped into was resentment. Resentment against the elites, the wealthy and well-connected, against the powerful. And this emotion has not disappeared.

Of course, Trump had no intention of giving power back to the people. He filled his cabinet with the elites and gave tax breaks to the wealthy. At the halfway mark of President Donald Trump’s first term, his administration had hired a lobbyist for every 14 political appointments made, welcoming a total of 281 lobbyists on board. The number of lobbyists who have served in government jobs is four times more than the Obama administration had six years into office.

No, the swamp did not get drained. But the fact that so many voters fervently hoped it would will not be lost on future candidates.

It will not be lost on the next strongman, who combines populist rhetoric with a cunning  and persuasion and discipline that Trump could never match. This is the great danger of a backslidden democracy.

100 thoughts on “Is Democracy Backsliding?”