Hello, friends, and welcome to the weekend. Ready for a New Year’s Brunch?

But it is still holiday time, so this week’s entries are all on the light side. Hope you don’t mind.

Octopus jail-break. Determined to find his way to freedom, an octopus named Inky apparently broke out of his tank, slithered across an aquarium floor and slid through narrow drain pipe into to the ocean.

The amazing stunt took place in the middle of the night at New Zealand’s national aquarium, after an employee apparently left the lid to the octopus’ tank slightly ajar.

Staff believe Inky took the opportunity to climb up over the top of his glass enclosure, slide down the side of the tank and slither across 8 feet of flooring to a drainpipe that empties into the ocean.

If you’re like me then no doubt you have spent countless thousands of sleepless nights wondering, “How long would it take a resurface a frozen Lake Superior with a Zamboni if we started tomorrow?”

Now, thanks to a study conducted by U.P. Supply Co., we have an answer.

In all, that means it would take approximately 693 years to resurface Lake Superior in its entirety. The ice resurfacer will have driven approximately 39,015,384 miles.

So, the bad news is that you’ll be long dead by the time it’s done. But at least you can sleep tonight.

I know what you’re thinking: what about the other Great Lakes. Here you go:

Matty James ordered an inflatable Santa on ebay this month. He was expecting an eight foot high Santa, but when he plugged in the fan it got a bit larger: 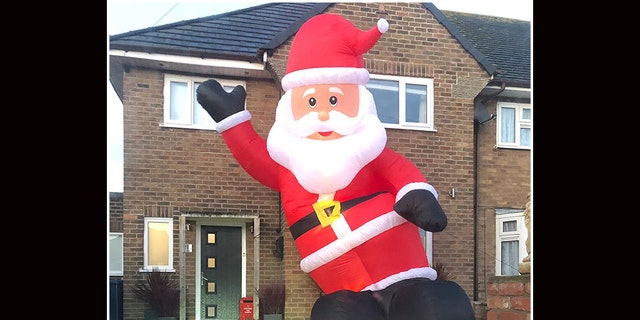 Matty decided to leave it up, though the first morning or two were kind of weird. “When I woke up in the morning, I looked out and his head would eclipse the window. Downstairs in the front room, when you opened the curtains, there was a big Santa bum in your face.”

If you have to live in Canada in the winter, you might as well make the best of it. That seems to be the idea behind the annual International Hair Freezing Contest hosted by the Takhini Hot Pools resort. Since 2011 hundreds of people from around the world arrive to create wild ‘dos out of nothing but hair and ice. “The purpose of the contest is to create the most creative frozen hairdos possible,” reads the resort’s website. “You soak in the hot springs and allow the steam to accumulate on your head while the cold air freezes your hair.” Here are some pics.

A Roman Catholic church in Louisiana used an unusual method to spread blessings all over town on Sunday: a crop duster

Members of St. Anne Church in Cow Island loaded 100 gallons of the blessed liquid onto the plane to be sprayed on the surrounding town and nearby farms, according to a Facebook post by the Diocese of Lafayette. Parishioners also brought water from their homes to the airstrip to be blessed by Rev. Matthew Barzare.

Amazon takes over. In 2018, Amazon became the second company in the world (after Microsoft) to be worth a trillion dollars. In 2019, Amazon surpassed Microsoft and became the world’s most valuable company. 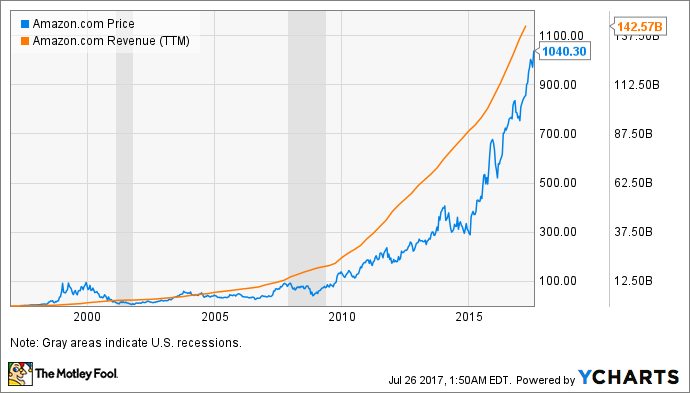 By the way, if you run across a time machine you might want to scrounge up some bucks and buy Amazon stock in 1997:

Amazon is also the leader (or near leader) in the two areas most likely to see profits and growth in the next ten years: cloud storage, and AI.

Even their CEO has transformed: from Fred Rogers to Bond villain:

Yep, pretty sure Amazon is going to take over the world. Maybe it already has: 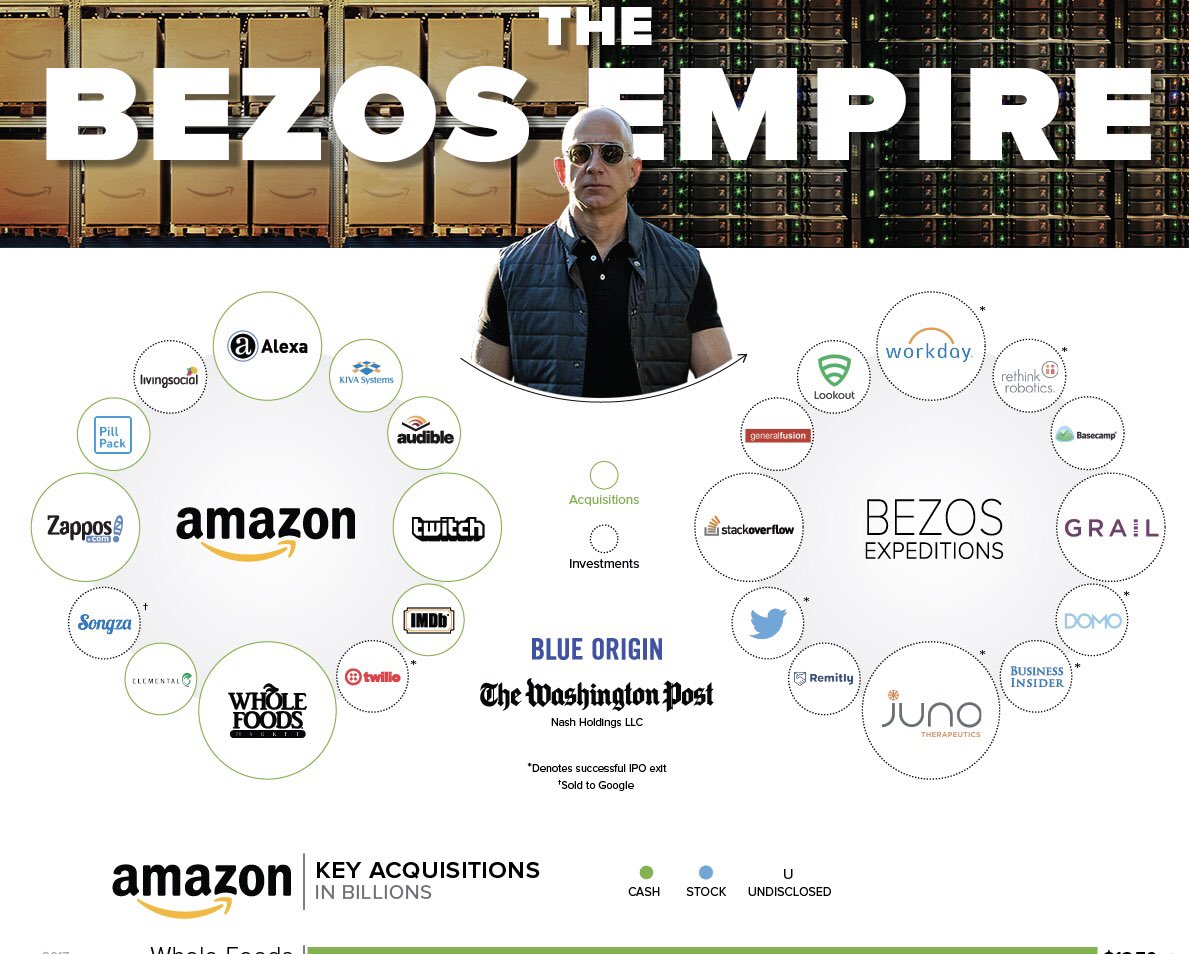 But wait…There’s Disney. Incredible fact: in 2019, of the top ten grossing films, eight were put out by Disney. Now, I’m not too good at math, but isn’t that like 80 percent? From one company?

Oh, and Disney also launched Disney Plus, their new streaming service. They also now control ABC, Hulu, ESPN, and a crap-ton of other content creators.

Here is a timeline or some of the larger acquisitions:

I think we can extrapolate a little to when these two companies begin to clash:

2021 Disney retaliates by buying the 90 percent of the cardboard stock in the country, and the van divisions of all major automakers.

2028 Disney buys the remainder of US copyrights and Microsoft. Windows 13 renamed Enchanted Mirror.

2030 US faces bankruptcy. Jeff Bezos cashes in half his Amazon stock to pay off the 4 quadrillion national deficit. Assumes presidency and renames the country the United States of Amazon. Begins plan to outlaw Disney.

2032 Disney uses all its opinion-making power (movies, tv, games, music) to convince consumers that nationalism and borders are antiquated and evil.

2034 Disney, tired of relying on propaganda, creates a droid army.

2035 Transnational and transcontinental wars break out. Bezos uses the crisis to buy Europe, thus solving the still unresolved Brexit issue. He also picks up Japan, and most of South America. Disney allies itself with China.

2037 Disney is soundly defeated, and uses its remaining resources to start a colony on Mars. Bezo takes over the rest of the planet.

2057 Disney offers to transfer all surviving humans to Mars for the low, low cost of 6.99 a month and unquestioned submission. Only a few scrappy rebels refuse.

2061 Disney launches military strikes against the rebels, whom mostly are able to flee on a stolen Disney ship to another solar system.

2091 Disney proclaims itself the Order of the Milky Way. Makes plans to “pacify” all sentient life-forms not under its control.

2112 After repeated battles with those scrappy rebels, The Order of the Milky Way gives it’s CEO unlimited political and military power. 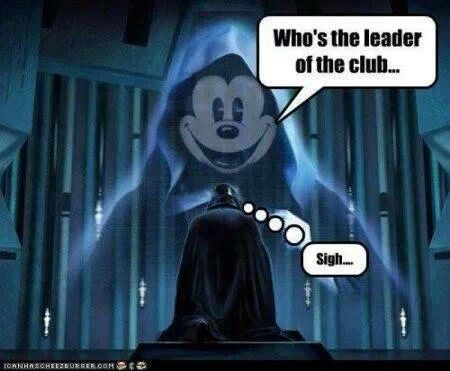 Well, that’s it for this week, my friends. Let’s end with a very young U2 playing New Year’s Day: